An archive of documents recording corporate activities of Computel Systems Ltd. — one of the earliest Canadian computer services companies.

The first commercially manufactured computers appeared in 1951. By the mid-1960s, the computer industry was well established and the broad benefits of computing to large and medium-sized organizations were  well understood. In the 2nd half of the 1960s,  an organization had two options to satisfy its computational needs.  It could create its own data processing center by purchasing the necessary equipment and hiring a team of computer professionals to operate the center. Alternatively, it could use  computers owned and operated by an outside computer service bureau — a vendor of computer power and skills. While the former option was available to all but a few richest organizations, the latter solution offered even mid-sized companies access to state-of-the-art computing infrastructure. Around that time computer services  became one of the fastest growing computer-based industries (it was growing at the rate of, approximately, 25% annually).

Although some computing services were offered in Canada as early as 1950s (the University of Toronto Computation Canter opened in 1952; KCS Data Control of Toronto started its operations in 1955), the real boom in the Canadian computer services industry begun in 1967 with the creation of Computel Services Ltd., later renamed as Computel Systems Ltd.

Computel was co-founded in Ottawa by  Warren Beamish and Robert Horwood. Incorporated in 1967, Computel was the first Canadian company to offer remote computer services using termionals connected to a centralized computer network. Using such terminals located in Computel's branch offices or on clients' premises, users could submit their data processing jobs, access a comprehensive library of applications, or develop and execute their own programs using  programming tools provided by Computel. Later, the company expanded its services by offering technical advice, programming assistance, data and program conversion as well as research and problem solving. Taken together, these offerings reflected Computel's philosophy of total service.

Computel inaugurated its services in early February 1968.  Terminals in Montreal, Ottawa, and Toronto communicated over phone lines with the company's Univac 1108 computer that offered 6  connections with remote terminals. Soon after, another Univac 1108 was installed in Toronto and an IBM 360 model 65 in Ottawa. The list of the first Computel's clients included the  Bank of Canada, Canadian National Railways, Defence Research Board, Departments of Agriculture, Finance, and Transport as well as  Dominion Bureau of Statistics,  National Energy Board, National Research Council,  Ontario Hydro, Unemployment Insurance Commission, and Whirlpool Corp. Computel viewed computing as commodity and purchasing computer power as utility. This was reflected in naming its offices as Computer Utility Centers.

The documents in the archive have been donated by Robert Horwood (Computel's co-founder and former president) and Gordon Gow (Computel's former director of marketing).

Other Documents and Publications 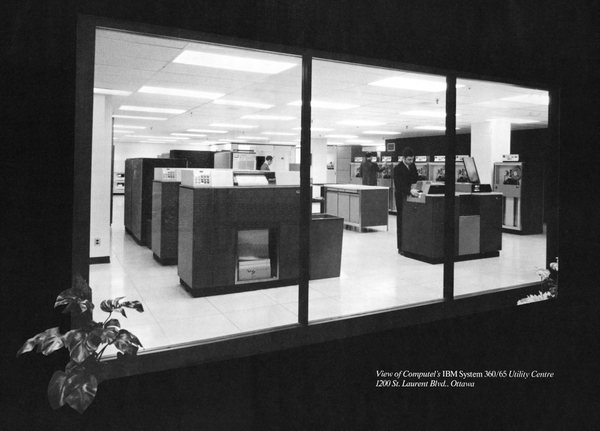 An image of the Ottawa office of Computel Systems Ltd.
View item