In the early 1980s, several companies explored market potential for providing software to home computer owners via TV cable (CATV) without compromising existing TV services. These companies maintained that cable networks would come into general use as a major medium through which software would be made available to the software-consuming public.

The NABU Network was possibly the most advanced and foremost among the early electronic delivery of software services. It was a brainchild of a Canadian entrepreneur John Kelly. The NABU Manufacturing, which would spawn the NABU Network, was incorporated in June 1981. Kelly lured top engineering and managerial talent away from several of the leading companies on the high tech scene to join NABU. Denzil J (Denny) Doyle left the presidency of Digital Equipment Corporation's Canadian subsidiary which he had established in 1963, to become NABU's first president and CEO.

NABU announced its network during the 1982 National Cable & Telecommunications Association Conference in Las Vegas. In May 1983, NABU transmitted its programming via satellite from Ottawa to terminals installed at the 26th Annual Convention of the Canadian Cable Television Association in Calgary. The transmission used the ANIK-D1 satellite, and it was a live feed from Ottawa. On 15 October 1983, the NABU Network was launched on Ottawa Cablevision, an 85,000-subscriber company where much of NABU's testing was performed. Soon thereafter, the network made its US debut in Alexandria, Virginia, on Tribune Cable, a 5,000 subscriber service.

To access NABU Network, customers had to purchase or rent a NABU PC  computer and a network adaptor. The network operated by broadcasting software and data from a high-speed head-end computer to every authorized subscriber  on a dedicated cable channel (see Figure 2). 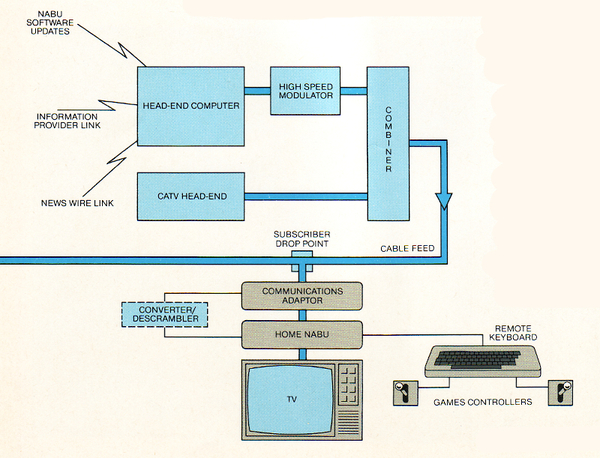 Once the NABU PC was connected to the adaptor and turned on, it requested from the adaptor two software items to be located on the network and sent to the user's computer. One was the downloadable operating system (or DOS). The other was the Main Menu software that allowed a user to navigate the network and to select and download the selected items. The adaptor was continuously receiving the NABU channel and as soon as the requested software was available, it transmitted it to the PC.  In short, the adaptor was responding to user's requests for downloading data and applications programs from the cable.

The network offered its subscribers software and information in a range of categories, including entertainment, education, family information, home management, and a network guide. The November-December 1984 issue of The NABU Network magazine lists over 140 titles available on Ottawa Cablevision's NABU Network. In Ottawa, NABU program listings were available online (on NABU's Network Guide) as well as in local newspapers and  NABU publications. Dedicated NABU magazines, newsletters, programming guides, and user groups provided subscribers with supplementary information and support.

NABU's long-term objective was to develop a global North American network in three phases. The first phase emphasized one-way transmission from the head-end computer down to the subscribers' PCs. Phase two was the development of a two-way NABU service within a single provider community. The third and most far-reaching phase was to feature a North America-wide web of interconnected NABU services. The head-end computers of different CATV providers were to be interconnected via satellite with each other, with externally located data bases, and with anyone else who wished to communicate via the NABU Network.

Unfortunately, because of financial difficulties, the NABU Network went off the air on 31 August 1986 in both Ottawa and Alexandria before phase two of NABU's business plan was implemented. Described as "the most innovative, daring, and least appreciated venture in the Canadian computer and communications industries" by some (D. Thomas), and "the `Internet' — ten years ahead of its time" check this link, the NABU Network was an innovative attempt to radically reshape the principles of personal computer-based public access to information and entertainment.

In 2005, the York University Computer Museum began a reconstruction project and online collection devoted to the NABU Network. Although the network was a technologically and culturally significant achievement, YUCoM NABU project was the only attempt at its reconstruction, analysis and full documentation.

The first phase of the project was the collection of NABU hardware used by subscribers (NABU PCs, Adoptors, peripherals) and a NABU 1100 workstation used by NABU developers. Consultations with former NABU employees were instrumental in gathering technical and historical information about the network. The collecting efforts also resulted in acquiring several issues of NABU newsletters, magazines, and other promotional material. Unfortunately, at that stages, neither the original NABU system nor applications software were located. The collected material proved to be sufficient to reconstruct the communication protocol adopted for the network which, in turn allowed the re-development of the NABU DOS and of the Main Menu software.

Because of the lack of any applications software, some rudimentary math games were developed. Furthermore, the Heli-Tank game offered by the Japanese ASCII Corporation for its MSX home computer was disassembled and adopted to the reconstructed network. In fact, this game was originally published by NABU under the title Mania and, later, adapted for MSX.

In 2009, the reconstructed NABU Network was ready.  It consisted of a NABU PC interfaced with a modern desktop computer which simulated both the head-end computer and the adaptor hardware.  It was named York University NABU Network (or YUNN). 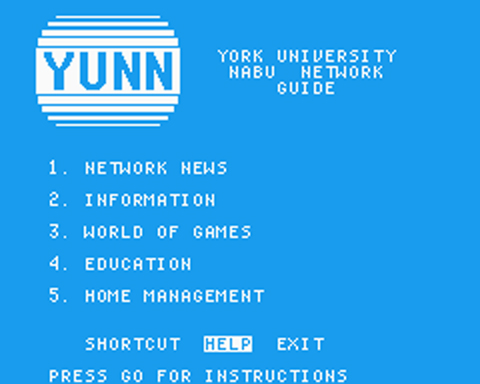 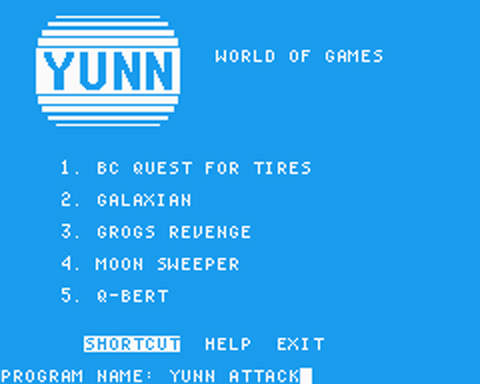 YUNN's Main Menu program had all the functionality of the original NABU Main Menu software with the exception of joystick interface which was not implemented. The screen shots in figure 4 show sample pages displayed during the applications software selection process. The first screen shot captures the main categories of application programs planned for the final version of YUNN while the second shot depicts the selection of YUNN ATTACK game via SHORTCUT facility of the menu program. The design of YUNN's logo followed the original NABU logo's layout. 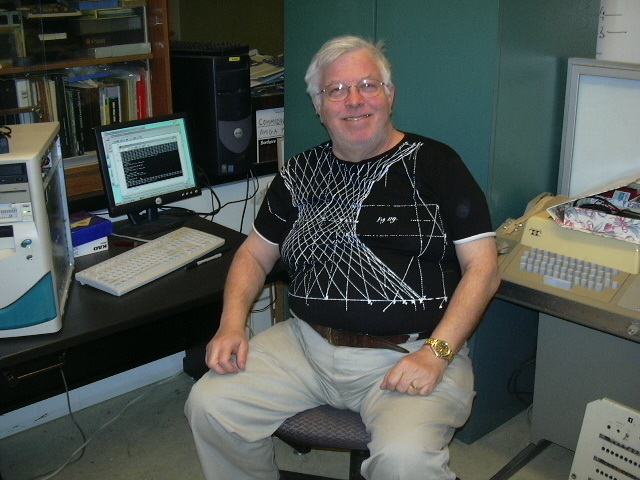 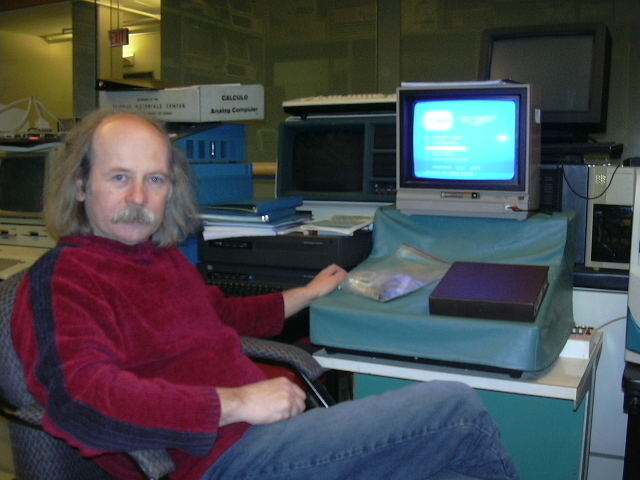 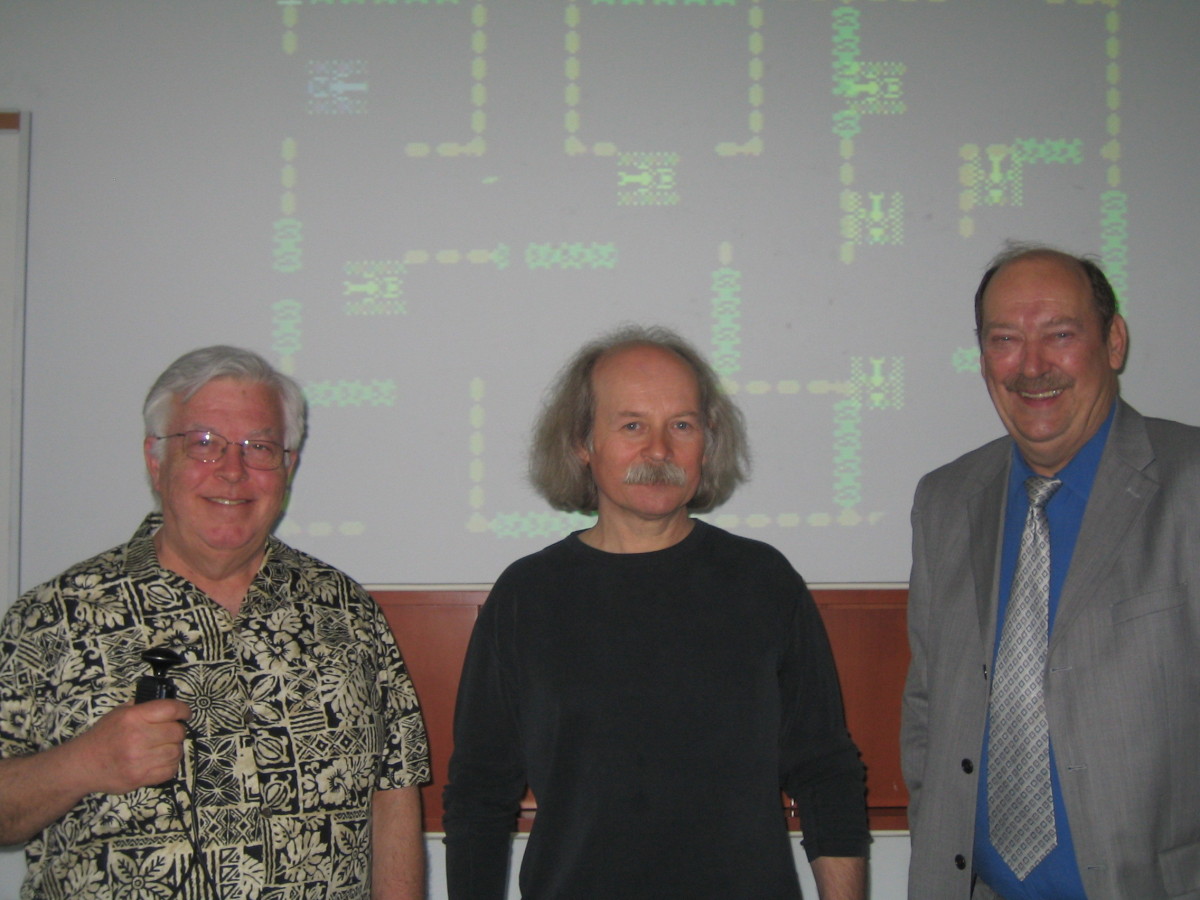 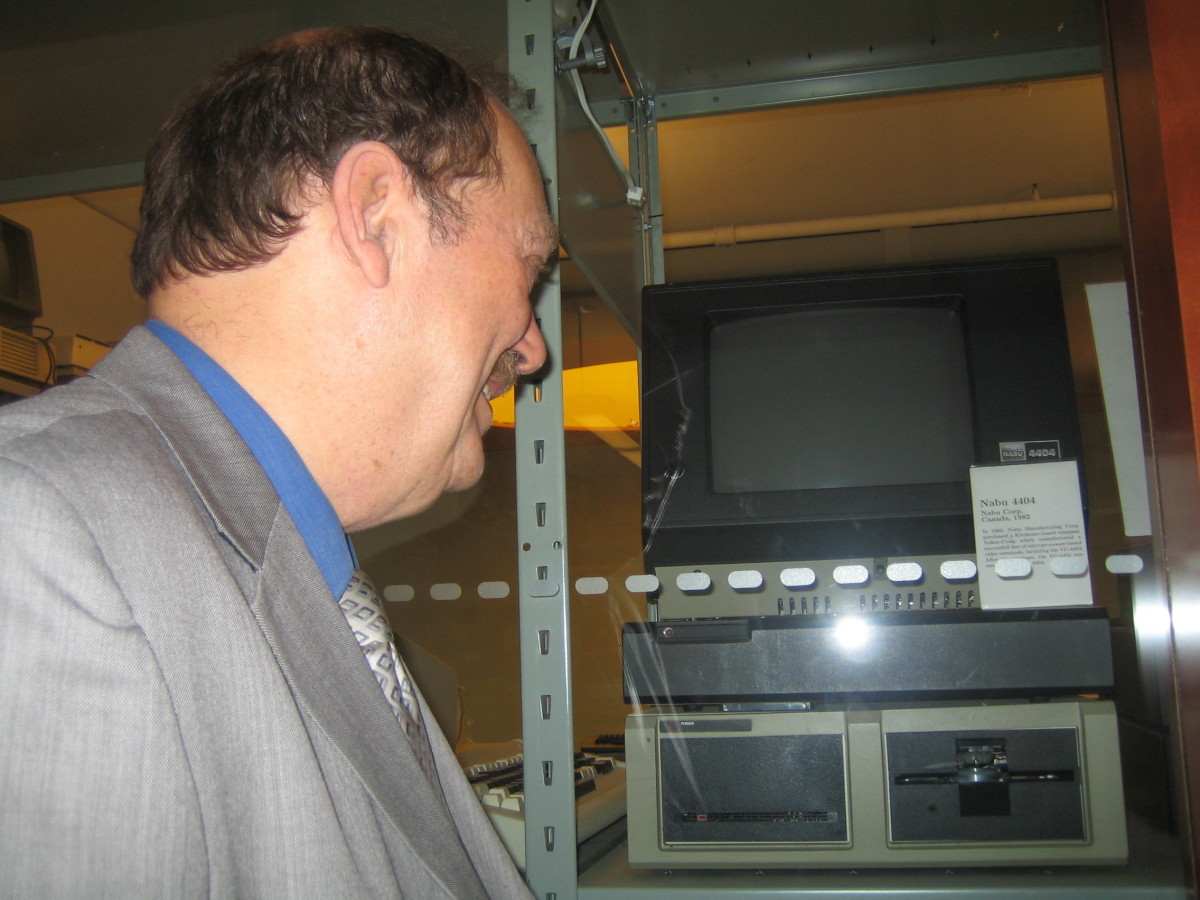 John Kelly's presentation was followed by a lecture given by Z. Stachniak and W. Kindree on the NABU Network reconstruction project at YUCoM, and by the demonstration of YUNN.

Mark Sutcliff  wrote about the NABU event at York in his  NABU Network an idea well ahead of its time article published by Ottawa Citizen on April 25, 2009.

On November 21, 2009, YUCoM's version of the NABU Network was demonstrated during a special NABU Network event organized by the Canada Science and Technology Museum (CSTM).  John Kelly's opening address was followed by the NABU Network Reconstruction Project at York University lecture, by YUNN's presentation, and by formal and informal discussions. It was particularly rewarding to see so many former NABU employees and NABU Network users participating in the event. 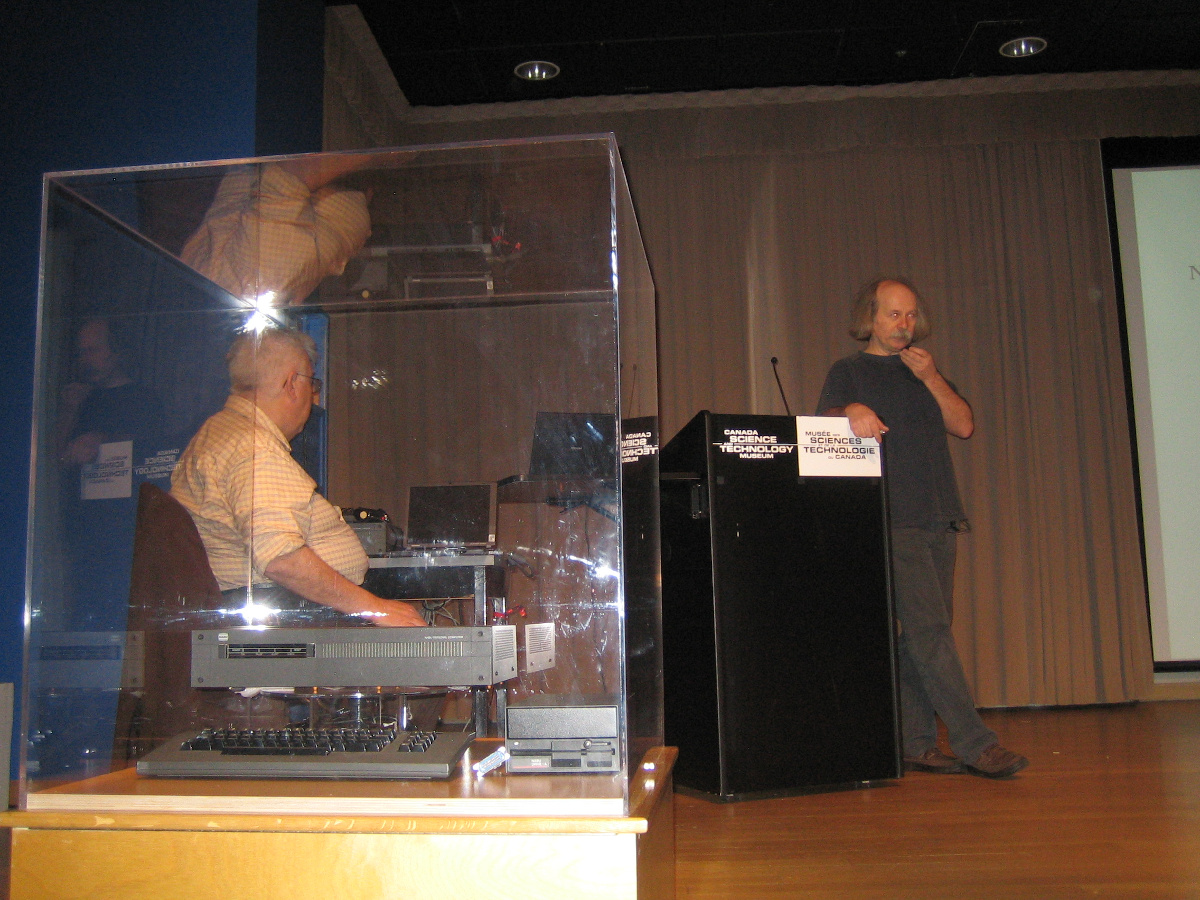 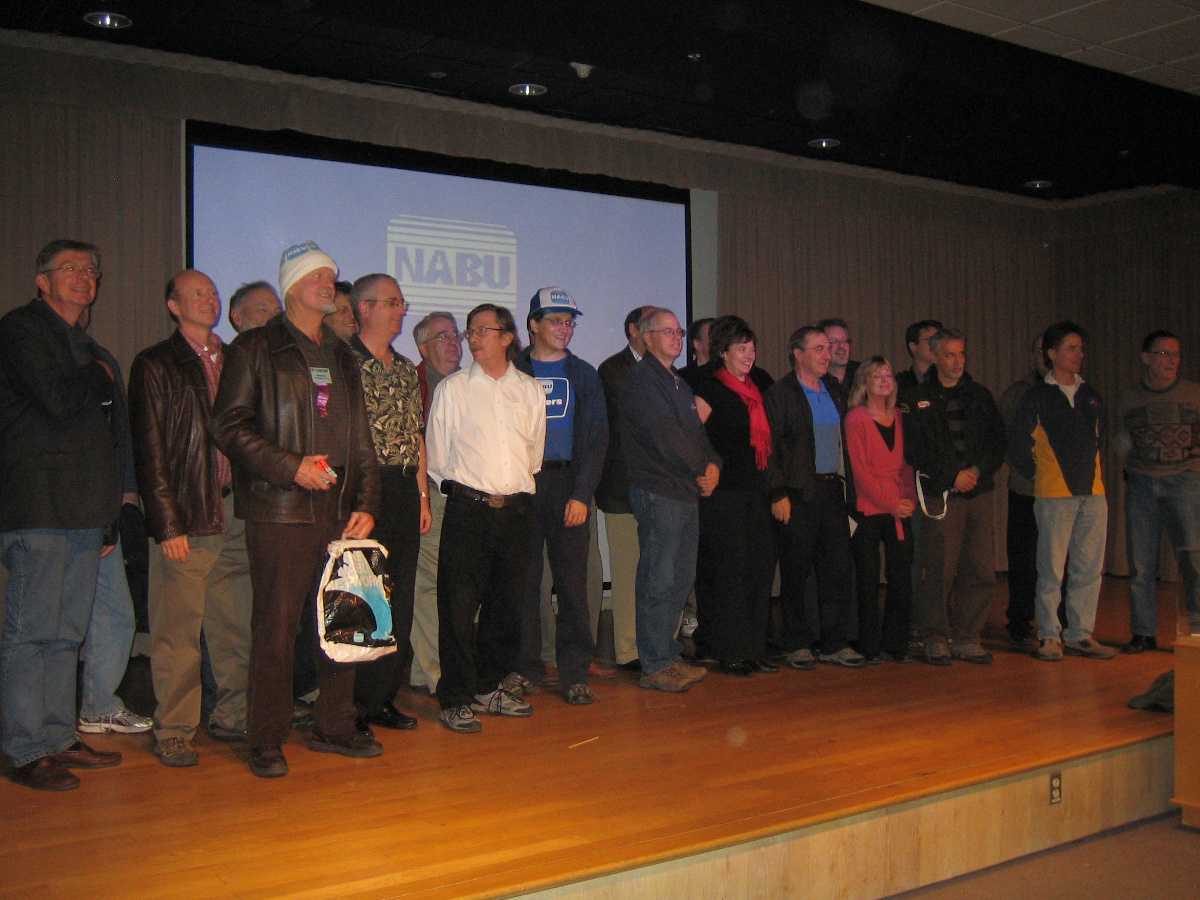 John Kelly's presentation was followed by a lecture given by Z. Stachniak and W. Kindree on the NABU Network reconstruction project at YUCoM, and by the demonstration of YUNN. The event was publicised by Ottawa major media outlets including Ottawa Citizen and CTV.

The Completion of YUNN Project

As a result of the NABU events at York University and the Canada Science and Technology Museum, YUCoM received several significant donations of NABU artifacts. In October 2009, the museum obtained a collection of original NABU software created for the NABU  development system. This collection included the original NABU DOS and Main Menu programs as well as over 100 applications and utility programs which were available to NABU subscribers in 1984 and 85.  After some adjustments to YUNN's communication software and the creation of content  feed, YUNN was able to provide almost complete programming that was offered to NABU subscribers in late 1984 as listed in The NABU Network magazine, November-December, 1984. In early 2010, the NABU Network reconstruction project has been completed. Since then, YUNN has been available for research and demonstrations at YUCoM.

The development of the NABU Network's software emulator started in Summer 2010. The main motivation for this work has been the historical significance of the NABU Network but limited portability of YUNN. The donation of the original NABU system and applications software made by a former NABU employee Bob McNally and the technical support and expertise offered by another NABU employee Leo Binkowski has made the new project feasible. The emulator will be available for desktop as well as mobile platforms. Currently, the emulator is undergoing extensive testing. A small set of the emulator's screenshots is presented below. 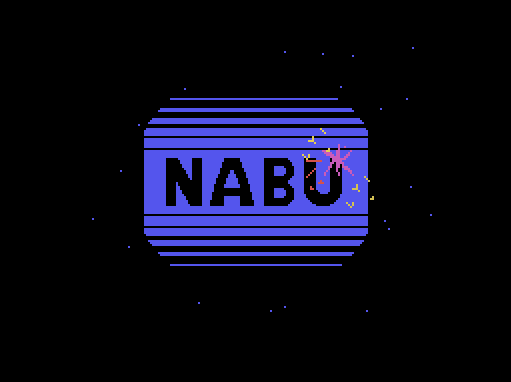 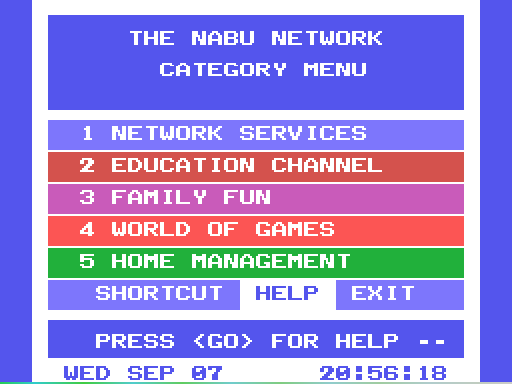 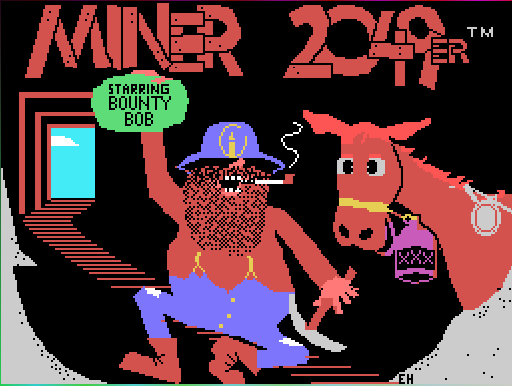 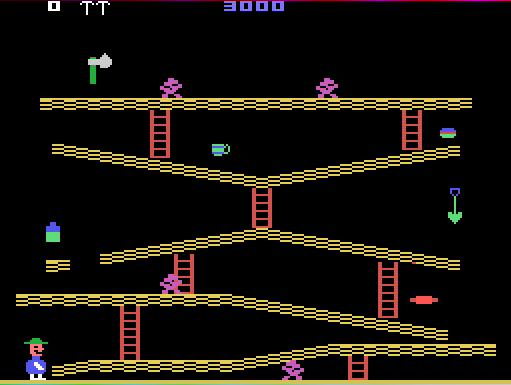 We would like to thank all the donors for supporting the NABU Network reconstruction project.

The original technical literature describing the NABU Network (manuals, technical reports, schematic diagrams, software listings) constitutes the primary historical source of information about the network. While YUCoM has built an extensive archive of such material, most of the NABU technical and corporate documents still cannot be located. This is why YUCoM continues its active search for such documents.

The museum is also interested in any undocumented information about the network, such as personal recollections, NABU software created by NABU PC users, and other NABU related material. Please contact YUCoM if you can help.