A Walk through YUCoM Collections

YUCoM collections and archives feature computing artifacts dating from the beginning of the 20th century to the first decade of the new millennium, showcased against a backdrop of the rapid progress in information processing and delivery technologies. This virtual tour is a brief presentation of some of the computing and calculating hardware designed and/or manufactured in Canada. You will also find samples of software developed and published in Canada, trade brochures, photographs, and other artifacts representing and documenting the development of the Canadian computer industry and the many paths of its social acceptance.

The ATI Collection. ATI Technologies Inc. of Markham, Ontario, was an electronics corporation and a world leader that specialized in the design, development, and manufacture of computer graphics solutions and chipsets for computer desktop and notebook platforms as well as workstation, set-top box, game console and handhold markets. For more information on ATI, view the ATI collection.

Above, left to right: the ATI EGA Wonder 800 and the Sapphire RADEON HD 5770 graphics cards, the packaging artwork for the ATI RADEON 9600 Pro, and the  RADEON HD 4650 graphics chip.

The Datar Archive. The Datar project at the Royal Canadian Navy marked the beginning of the digital age in Canada. This archive is one of the historically most important collections of documents  recording a groundbreaking Canadian technological undertakings.

The DY-4 Collection. DY 4 Systems Inc. was an Ottawa-based high technology company founded in 1979. In the early 1980s, DY 4 designed and manufactured a variety of products including desktop microcomputers, single-board computers, and graphics terminals. In the second half of the 1980s, the company shifted its attention to the development and manufacturing of products for harsh environments.

The Dynalogic Collection. Dynalogic Corporation was among the first Canadian microcomputer manufacturers. Founded in 1973 in Ottawa, it initially focused on the design of floppy disk systems and interfaces for minicomputers and desk-top calculators. In 1976, the company moved into the general-purpose computer market with the introduction of its DMS-8 computer. In 1982, the company unveiled the Hyperion — one of the first IBM PC compatible desktop computers.

Above, left to right: The DMS-8 microcomputer, the Hyperion portable desktop computer, early design of Hyperion's case, and a Hyperion promotional brochure.

The IPSA and APL Collections.  I.P. Sharp Associates (IPSA) was formed in 1964 in Toronto as a software company. From an exclusively Canadian company, it had evolved into an international software and communications firm. The company was actively involved in the development of the APL programming language invented by a Canadian computer scientist Kenneth Iverson  in mid 1960s. In 1969, IPSA offered its first commercial APL time-sharing system to customers in Canada and the United States. Since then, the company was continuously improving its dialect of APL known as SHARP APL. By the early 1980s, IPSA  time-sharing service was available through an efficient world-wide communications network—IPSANET—one of the largest and most advanced in the world. 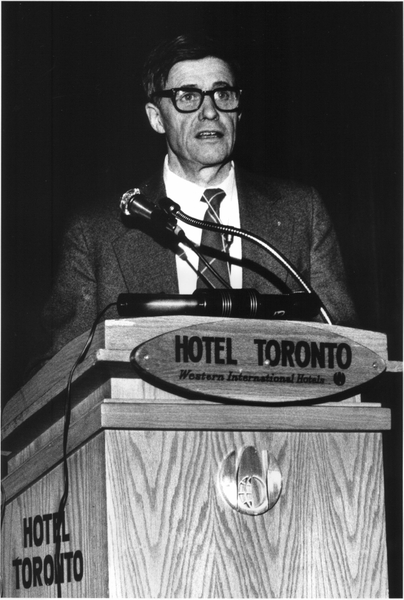 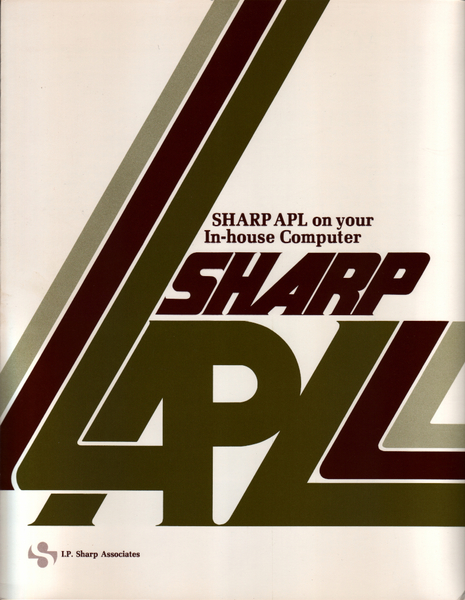 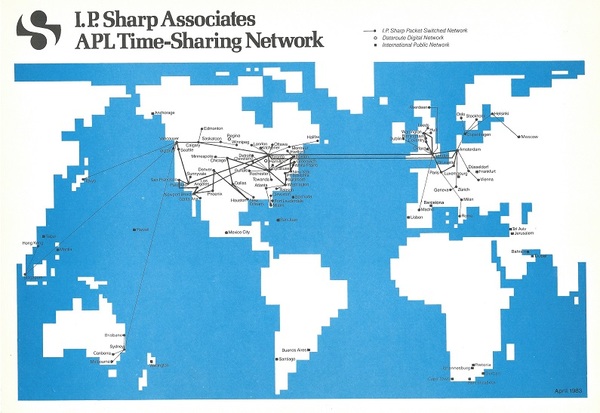 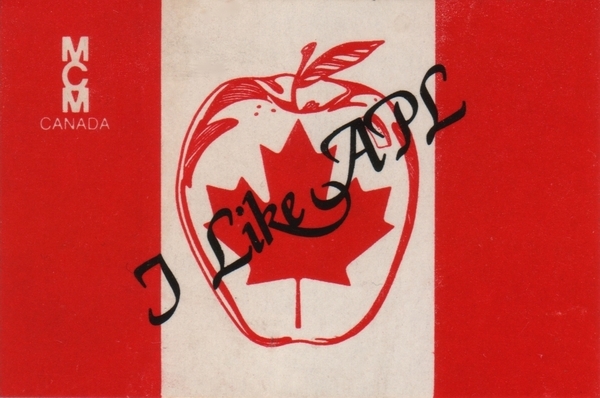 Above, left to right: Kenneth Iverson delivering a lecture during the "1980 APL Users' Meeting" in Toronto,  SHARP APL promotional brochure, IPSANET map (1986), and "I Like APL" MCM logo.

The Matrox Collection. Matrox Electronics was founded in Montreal in 1976 at the peak of the North American computer hobby movement. The company's first product was a specialized video-display device called Video RAM (1977) which interfaced with a computer to display computer-generated alphanumeric data. At the same time, Matrox offered the ALT 256**2 graphics board for the S-100 bus-based microcomputers, making Matrox the first company to offer add-on graphics cards for the microcomputer market.  Currently, according to the company, "Matrox hardware and software products are deployed across a diverse range of industries, including broadcast and media, education, enterprise, government, houses of worship, medical, military and defense, process control and utilities, security, and transportation."

The MCM Collection. Micro Computer Machines (MCM) was the world's first company to embark on the personal microcomputer project. In 1972, it began designing its MCM/70 personal microcomputer, which the company offered in subsequent years with system and some applications software. The MCM/70 was followed by the MCM/700, MCM/800, MCM/900, and Power computers. The MCM collection is one of the museum's largest assembly of artifacts dedicated to a single Canadian company

The MOD8 and MOD80 influenced other early microcomputer designs for the hobbyists' market. Some early hobby computer clubs bulk purchased sets of unpopulated MOD8 or MOD80 printed circuit boards to built and experiment with their first computers.

After MIL's closure in 1975, the microprocessor and microcomputer expertise developed at MIL was
disseminated throughout the Canadian high-technology industry and the North American computer hobbyists' movement.

Above, left to right: The MP-1 chip set containing the MF7114 microprocessor, the CPS-1 emulator, the MIL MOD8 computer, and the "MF8008 Central Processor Applications Manual."

The NABU Collection. The NABU Manufacturing Corp. was incorporated in Ottawa in June 1981. NABU's business plan was to capture a sizable share of the microcomputer market by offering the
world's first cable-ready computers and by implementing a new delivery method for software and
information. To that end, in 1983, NABU Manufacturing launched its NABU Network on Ottawa Cablevision. This event marked the creation of the first commercial computer network to provide high-speed access to information and services directly to homes of personal computer users.  For more information on the network, follow the NABU Network reconstruction project link. NABU was also manufacturing computers (the NABU PC, the NABU 1600, and the NABU 1100) and display terminals (the NABU 4404).

Above, left to right: a NABU 1600 promotional brochure, the NABU 4404 terminal, the NABU PC, and the November-December 1984 issue of the "NABU Network Magazine".

TRACE and Hobby Computing Archives. The introduction of the first commercial microprocessors to the market in the early 1970s prompted several companies and individuals to design small, inexpensive, general purpose computers around these novel semiconductor devices. When the first such computers  began to appear between 1973 and 1975, they caught attention of electronics hobbyists. Their enthusiasm for the ‘computers of their own’ gave birth to a forceful microcomputer hobby movement that played a pivotal role in the social acceptance of personal computing. Organized in clubs and groups, the hobbyists were building their computers, organizing and participating in computer  shows, exhibits, conferences, and literacy programs, socializing on computer bulletin board systems (BBS systems) as well as publishing newsletters, magazines and computer art. The earliest Canadian computer hobby organization was  the Toronto Region Association of Computer Enthusiasts (TRACE) formed in 1976. The Toronto PET Users Group (TPUG) founded in 1979 was the largest among the early Canadian computer users group  with members across Canada and around the world.

Above, left to right: "TPUG Magazine" (December 1985),  "TRACE Newslstter" (November 1982), Howard Franklin reassembling his hobby computer that he built in 1973, and an artwork created for the Screaming Tomato BBS (1990s).

Other Objects of Interest at YUCoM

YUCoM hosts artifacts related to over 200 Canadian companies. Although significant number of these artifacts haven't been yet organized into either a collection or an archive, some of them should be noted during this virtual walk.

Advanced Gravis Computer Technology, Ltd. The company was  founded in 1982 in British Columbia. It designed and manufactured electronic game controllers (joystiks and game pads) for a range of early home computers including the IBM PC and Apple microcomputers as well as for the Nintendo, Amiga and Atari game consoles. By the end of the 1990s, Gravis was one of the world's largest manufacturers of game controllers selling its products throughout North America and Europe.

Commodore. Commodore Business Machines (or Commodore) was one of the largest and most influential home computer manufacturers of the 1980s, founded in 1958 in Toronto, Ontario. The list of the companies iconic computers includes the Commodore PET desktop computer as well as the VIC-20 and C64 home computers.

Above, left to right: Commodore 202 and C108 desktop calculators, the VIV-20 home computer, and the Commodore SuperPET desktop computer.

Exceltronix. Founded in 1979, Exceltronix was one of the largest and popular electronics stores of the 1980s in Toronto. From a retail store specializing in electronic components, Exceltronix had expanded into a group of companies (Exceltronix, Multiflex, Toronto Computing Center, Versa-Digital Technology, Digi Media) covering research and development, manufacturing, retailing, and mail order. Originally located in downtown Toronto, Exceltronix was in the center of computer hobbyist movement supplying the hobbyists and general public with computer components, computer kits, and fully assembled systems.

Research in Motion. Research in Motion (RIM, now Blackberry) was incorporated in 1984 in Ontario, Canada. From its modest beginnings as a wireless handheld communication device maker, RIM grew to become a global leader in wireless  mobile industry. By the end of the first decade of the 2000s, a fifth of all smartphones sold throughout the world were BlackBerry devices offered in 170 countries via 530 carriers and distribution partners. In that period, the BlackBerry smartphones became some of the most iconic items of consumer electronics market.

For more information on the history of computing in Canada see Z. Stachniak and S. Campbell, Computing in Canada: Building a Digital Future,Transactions, 17, Canada Science and Technology Museum (2009).

A Walk through YUCoM Collections